So A and I got married, we took pictures and had a dream reception site. Now it was time to party!

We opted to do full bridal party introductions right after cocktail hour. I think it adds some drama to the bride and groom’s entrance into the reception and I always love seeing everyone’s personality during their moment in the spotlight. Our bridal party did not disappoint in the personality department! On top of the that, using one of the Deli’s in Long Island for the catering turned out to be one of the best decisions ever!

Everyone entered to Best Day of My Life by American Authors and its upbeat tone definitely brought out some dance moves.

So did letting the bridal party join cocktail hour. Maybe that had more to do with the dancing than the song choice.

Ok. I think it definitely had more to do with the cocktail hour refreshments than the song choice.

A and I didn’t break out any epic dance moves, but we did offer a curtsey and bow in tandem. It was unplanned, y’all, I swear. It’s just who we are…#awkward.

We opted to do our first dance right away mainly because it felt more natural when we were planning our day’s schedule. Our song was I Cross My Heart by George Strait and it was perfect. We didn’t choreograph our first dance, although I did force A to practice with me because I’m clumsy and my dress was long. Luckily, we managed to avoid any such bloopers and even executed some really sweet moments and a pretty legit spin. If you’re looking for the best soundtrack for your first dance, check out this list for some great choices – https://www.headliner.io/blog/top-wedding-song-playlists/

Awww. Look how cute we are! Some of these candid moments are my absolute favorite photos of the day. I’ll share more over the next few weeks, but this one is probably my favorite first dance photo.

This one is a very close second! We likely had just successfully pulled off our big power move: the spin! The guests all started to clap and cheer and I couldn’t help but laugh. A told me later it was because everyone was so surprised I hadn’t tripped. Thanks, sweetie.

After dinner, we had the parent dances. My dad and I chose Unforgettable by Nat King Cole and Natalie Cole. My parents used to sing this one to me when I was a baby so it was a natural choice. Surprisingly, we made it through the whole dance without shedding any tears. In fact, we laughed and smiled far more than anything else.

This one gets me right in the feels. I can’t even try to explain it without getting all misty-eyed.

A and his mom chose My Wish by Rascal Flatts and it was very sweet. But they don’t do the mushy kind of sweet very much, so in a move that was very fitting, they switched songs about half way through!

A’s mom got to dance with all her boys to Don’t Stop ‘Til You Get Enough by Michael Jackson and looked absolutely thrilled the entire time. We blew this photo up for her Christmas present and it’s already hanging in her home office.

As a side note, that is A’s dancing face. You will likely see that in future posts. Yes, he does get mad when I tease him about it. No, it doesn’t keep him from making said face when he dances. Yes, it’s adorable.

Our final formal dance was the anniversary dance, instead of the more traditional bouquet toss. Married couples joined us on the dance floor and as the DJ announced year markers, they left the floor until just one couple was left, and would receive our bouquet. I used my parents’ first dance song (Just You and I by Crystal Gayle and Eddie Rabbitt) for this dance.

I love this photo of my parents. It’s such a perfect way to honor them staying married for so many years and setting such a fantastic example for my marriage.

And here are the winners of the anniversary dance! They have been married for over 40 years and were so excited when I gave them my bouquet.

Coming up next week: speeches and cake cutting! 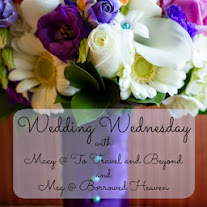 Our Wedding: Reflecting on the Best Day Ever